“Yes, my friends, I believe that water will one day be employed as fuel, that hydrogen and oxygen which constitute it, used singly or together, will furnish an inexhaustible source of heat and light, of an intensity of which coal is not capable…. water will be the coal of the future.”

After the 20th century has been known as the “hydrocarbon century”, it is likely that the next one hundred years will be called the “hydrogen century.” Hydrogen as non-polluting, CO2-free energy carrier has been considered an ideal way to confront the depletion and environmental problems of fossil fuels. The main objective of the project is the overall splitting of water to oxygen and hydrogen using sunlight as clean, renewable, and abundant source of energy. Since water itself does not absorb noticeable radiation within the solar spectrum, a light absorbing species (sensitizer) must be employed to convert the radiant energy to chemical energy. The approach to the subject by heterogeneous catalysis takes advantage of photochemically stable inorganic materials such as semiconductors. Upon irradiation electron-hole pairs are formed and trapped at reactive surface sites from where interfacial electron transfer (IFET) reactions to adsorbed water have to compete with the undesirable processes of charge recombination and reactions with the semiconductor itself (photocorrosion). The overall efficiency of semiconductor catalyzed reactions depends in a complicated fashion on various parameters such as the semiconductors modification, surface structure, particle size or the nature of substrate adsorption at the solid/liquid interface. Tantalates have recently attracted attention as a new group of materials for water splitting. However, due to bandgap energies of ~ 4.0 eV for most tantalates, light of l ≤ 300 nm is required for excitation and it remains a challenge to extend the response to solar light and increase the photocatalytic activity for water splitting at that. 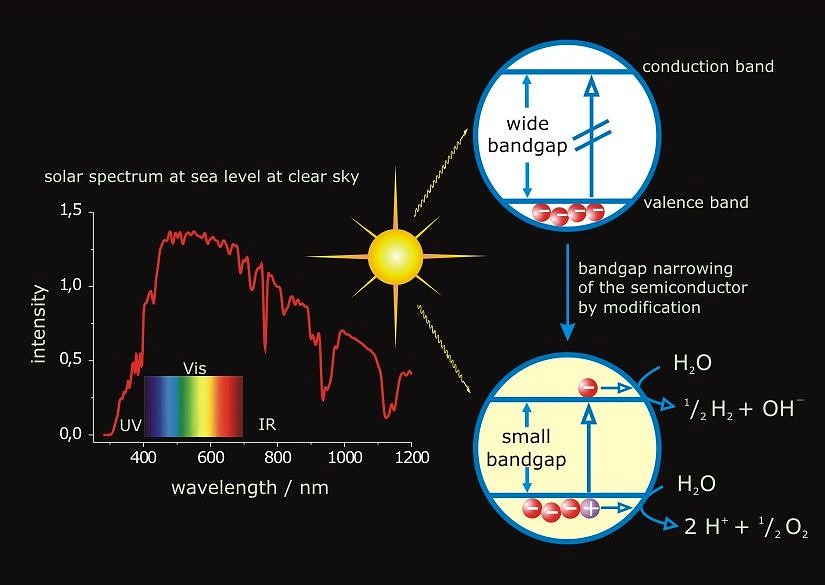